Clients Who Made Me Better: Early Lessons 2

It is easier to discover a deficiency in individuals, in states, and in Providence, than to see their real import and value. 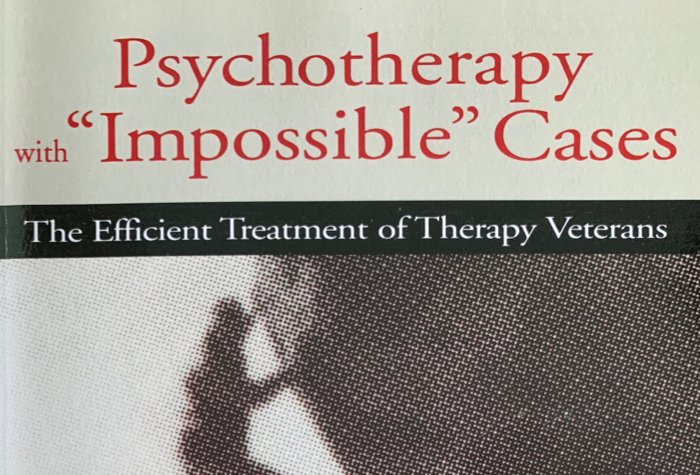 Before PCOMS, I started a project looking at clients who were “multiple treatment failures,” which resulted in a book featuring the lessons learned from my clients: Psychotherapy With “Impossible” Cases (Duncan et al., 1997). We learned that success could occur in the most difficult circumstances when the person’s own ideas were recruited and implemented. We also discovered, predictably, that problems in the therapeutic alliance accounted for most of the "treatment failures” that found their way to our investigation. Molly is my favorite story from that project.

Molly’s parents were recently divorced. Nine-year-old Molly was sleeping in her mom’s (Kim's) bed and having trouble adjusting to a new apartment, school, and friends. At a mental health clinic, Molly was identified as coming from a “dysfunctional family.” Diagnosed as having “separation anxiety disorder,” she was referred for weekly “social skills” group therapy. After a few weeks, Kim reported that Molly was also experiencing nightmares.

The group therapist responded by also seeing Molly individually. The therapist encouraged Molly to remove herself from her parents' problems. He invited Molly’s dad into therapy, but he never showed. Following 6 months of concurrent group and individual treatment, things were worse: Molly was having more frequent nightmares and was beginning to struggle at school. Kim requested a different therapist, a female this time.

The new therapist suspected sexual abuse and played games with Molly looking for sexual themes, to no avail. Three more months passed and things continued to get worse — Molly’s grades took a nose dive. Kim next requested a therapist outside the clinic. Instead, a psychiatric evaluation ensued that reconfirmed the diagnosis of separation anxiety disorder (and added that Kim had borderline tendencies, a diagnosis often reserved for those who complain about services). An antidepressant was prescribed to relieve Molly’s separation anxiety. More time passed and no change occurred. Molly, in twice-weekly treatment for nearly a year and now on medication, had become, at the age of 10, an “impossible case" resulting from multiple treatment failures.

The main goal of the “impossible case project" was to investigate how impossibility developed — how clients came to suffer “bloated file” syndrome or staying in therapy for extended periods of time without benefit. The project deconstructed all the ways that impossibility had run its course with Molly:

Kim, dedicated to her daughter’s welfare, discontinued the medication and demanded an outside referral. That brought Molly to our project. In my first meeting with Molly, I asked her what she believed would be helpful for resolving the “nightmares and sleeping in her own room” problem. To this, Molly expressed astonishment that someone finally wanted her opinion. She then suggested she could barricade herself in her bed with pillows and stuffed animals. The barricade would “ward off” the nightmares and her fears. In the second session, she reported that her plan was working. The excerpts below reflect Molly’s observations about what was not helpful in her treatment experiences:

Molly: So what I’m saying to all therapists is we have the answers, we just need someone to help us bring them to the front of our head...It’s like they’re locked in an attic or something, like somebody locked them in a closet and nailed them down…

Barry: So the things the therapists told you to do didn’t help?

Molly: It didn’t help. I didn't want to do them. They weren’t my ideas, and they didn’t seem right.

Molly: I feel a lot better now that I came up with the solution to sleep in my own room, and I did it and I’m proud of myself. And I couldn’t be proud of myself if you told me, “How about if you barricade yourself in with pillows, maybe that’ll work?” I wouldn’t feel like I’ve done it. So basically, what I’m saying is, you don’t get as much joy out of doing something when somebody told you to do it.

Molly was obviously wise beyond her years — when provided the opportunity, Molly revealed her inventiveness, derived her own solution, and in that process, enhanced her self-esteem.

Avoiding Pitfalls in the Therapeutic Alliance

But the real lessons of Molly’s course on how to do therapy are about the therapeutic alliance:

Molly: All my other therapists haven’t asked me what I wanted to work on. They asked me questions and I didn’t really want to answer these questions because, shouldn’t I be telling you what I think about this?

Molly: I mean you are not here to tell me my life or anything.

Molly: You’re a therapist — you’re supposed to sit there and listen to me talk! But if they are saying, well, your Mom tells me that your Dad is doing such and such a thing or more stuff… It’s like, since when did I start having problems with that?

Molly makes it clear she felt discounted and ignored. What she perceived as important was not solicited. Her goals were not given priority, and her collaboration not encouraged. The therapeutic alliance literature would accurately predict her negative outcome.

Recall that this is the same child placed in a social skills group, diagnosed with separation anxiety disorder, treated with medication, and seen for a year! If a gem like Molly can be missed while working with therapists with all good intentions, we must take special caution to ensure we build strong alliances and be mindful of clients’ existing abilities.

Returning to Molly one final time, she nails the pitfalls of not including the client as a valued partner:

Molly: And therapists are basically telling you what they want you to do… And it is like that they think they are some all mighty power or something.

Barry: That drives me nuts when they think they are the all mighty word.

Molly: Like they are God. (Molly looks up, extends arms, and sings as though in a choir.)

Barry: Oh, that is music to my ears, Molly. You know, we think a lot alike.

Molly: It’s like, hang on, I am also somebody. And you laugh at what I mean to be funny; and back at my old therapy, whenever I said something, she just busted up. It’s like, hey, I have an opinion, too!

Barry: She did not take you seriously...

Molly: No! And she even said, ‘I love working with kids and I work really well with kids.’ (Molly leans forward and looks very serious.) Every kid that she sees goes for, like, years…

Molly is a caution, no doubt, and has been a powerful teaching tool to illustrate alliance pitfalls to avoid. Molly and the "impossible case project" taught me that the alliance is the therapy.