A major benefit of the Partners for Change Outcome Management System (PCOMS) is the identification of clients who are not benefitting, permitting new directions to be collaboratively charted. PCOMS prevents us from falling victim to wishful thinking—that clients will ultimately change even if they aren't now.

Consider Matt, a 20-something software wizard, who because of a recent promotion was frequently on the road troubleshooting customer problems. He loved his job. Even so, traveling had become an ordeal. Matt had a personal problem that made flying unpleasant—an inability to urinate in public restrooms and airplanes. At the outset, short trips caused only mild discomfort and was solved by monitoring his fluid intake and repeated visits to the bathroom before leaving home. In time, though, as longer flights became necessary, the problem began to cause intense apprehension before each trip, excruciating feelings of pressure in his bladder while on the plane, and sometimes hair-raising panic attacks. One time his inability to go on a long trip to the West Coast resulted in a retention episode and a trip to the ER for a catheter—a demeaning and demoralizing experience that only increased the episodes of panic in anticipation of travel. Hopeless and demoralized, the young man considered changing jobs. As a last resort, he decided to seek psychotherapy. His initial score on the Outcome Rating Scale (ORS), 10.7, reflected the distress written on his face. 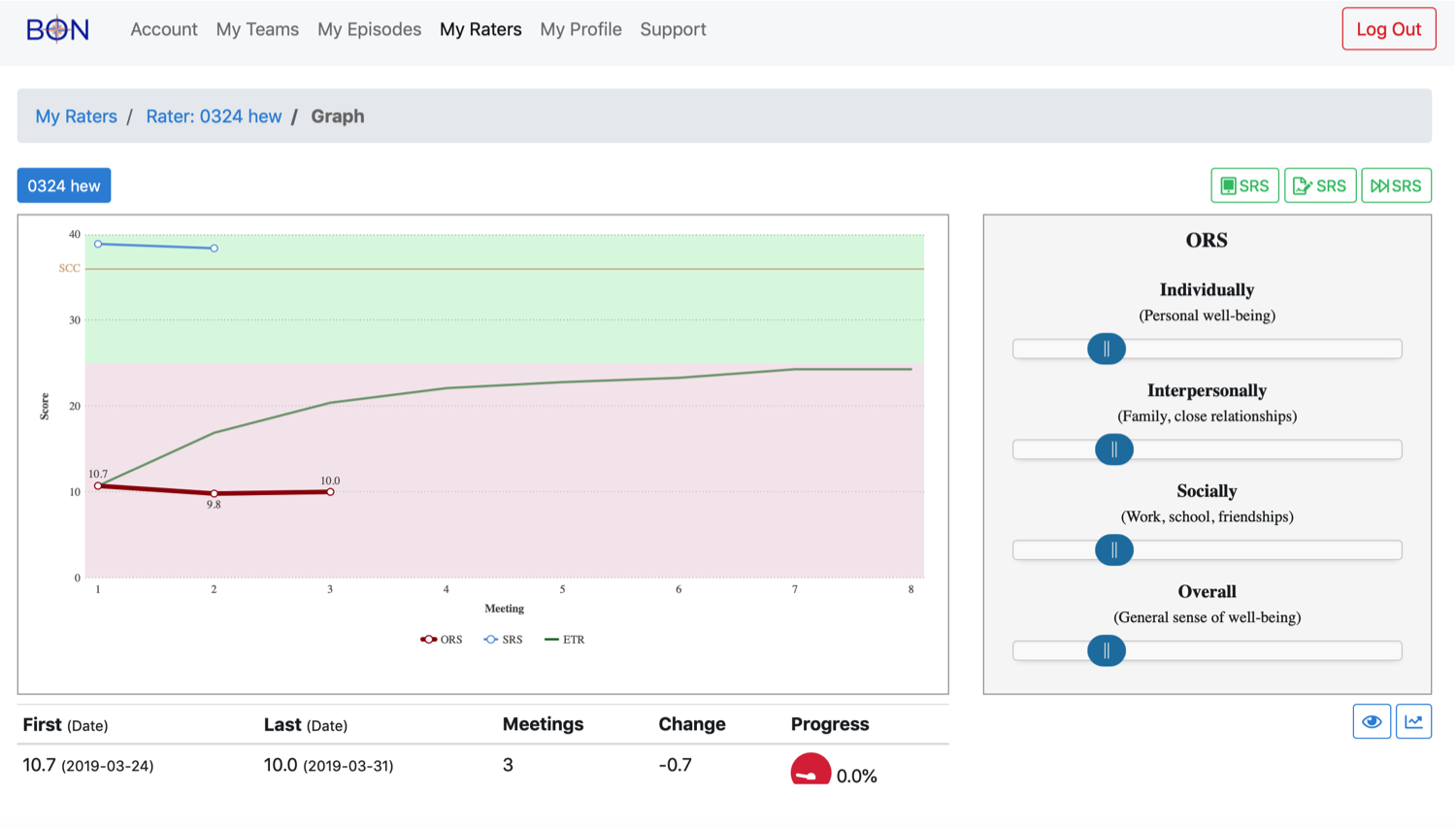 Matt and I seemed to hit it off and the Session Rating Scale (SRS) and our discussion confirmed that we had a good start. He was particularly glad that he could finally talk about his difficulty, an embarrassing problem that often has other connotations about one’s masculinity. Matt didn’t have any particular ideas, definitely communicated some urgency for resolution, and looked to me for guidance, so I suggested some possibilities. In short order, he was helped to implement relaxation and “self-talk” cognitive-behavioral strategies, which he diligently practiced in session. As agreed, he employed them preceding his next trip and while on board the plane. The results were far from encouraging. The problem intensified and his sense of shame along with it. More alarming, his mood became decidedly hopeless.

Matt was at significant risk for a negative outcome: either dropping out or persisting in therapy without benefit. At the third session, when the ORS reflected no change, as I always do at this point in therapy, I went over the SRS and we settled on the item “The therapist’s approach is a good fit for me.” Matt hesitated so I asked him, “Matt, in your heart of hearts, do you think the strategies we are using to address this situation are going to make a difference for you?” He quietly said, “No.” It motivated us to brainstorm a range of possibilities for the remainder of the session. During this exchange, Matt expressed in no uncertain terms how much his problem was interfering with his work and his life. The possibility that he’d have to endure any extended separation from his own bathroom had become almost unthinkable—he was sick and tired of the stranglehold the problem had on him. He became quite animated, even angry, in conspicuous contrast to the passive resignation that had characterized previous sessions. When one of us said the words “pissed off,” we both broke into raucous laughter. A possibility was discovered.

Later in the visit, I suggested that there were a lot of ways to tackle this problem, that changing how one thinks during the problem is a way but another is changing what one feels. I wondered aloud that instead of responding with hopelessness when the predicament occurred, Matt could work himself up into righteous anger about how the problem was sabotaging his life. Matt liked that idea and added, since he was a retro rock-and-roll buff, that he could also listen to Tom Petty’s “Won’t Back Down” during his tirades at the toilet. From then on, he permitted himself, when standing before the urinal, to become thoroughly incensed, “pissed off,” and somewhat amused. His problem soon resolved.

The ORS Shines a Light

Of course, this kind of collaborative, creative process could have happened with any therapist working with Matt. The difference is that the use of the ORS spotlighted the lack of early change. Impossible to dismiss, it brought the risk of a negative outcome front and center. Without the findings from the ORS, I would likely have continued with the same strategies for several more sessions, hoping that these reasonable methods would eventually take hold. The danger with that approach is that Matt might have dropped out concluding that psychotherapy was not helpful. As it was, the evidence obtained through the measure pushed me, and Matt, to explore different options. And that’s why I love what PCOMS has brought to the work.