IN MEMORY OF DR. JACQUELINE A. SPARKS

Dr. Jacqueline A. Sparks, PCOMS co-developer, social justice advocate, critical thinker extraordinaire, university professor, journal editor, person who I would most like to be on my team behind the mirror, and my best friend, died November 3rd after a lengthy illness.

The world is not quite as good without her. Those are very hard words to write. Behind her voluminous publications, impeccable scholarship, and amazing writing abilities, Dr. Sparks championed two ideals in her work throughout her career. First and foremost, she was driven to transform systems of care to privilege the client in all service delivery, especially their goals for service and how those goals are approached—to include consumers in all decisions that affect their care. Deeply embedded in her operationalization of client privilege was a call for cultural responsiveness and the promotion of social justice. She was there in the trenches when our work together regarding client privilege and social justice culminated in the Partners for Change Outcome Management System or PCOMS, a method that levels the hierarchy in therapy and collaborates with clients while honoring their views of benefit and relationship. She co-authored with me the first PCOMS manual in 2002. Ten randomized clinical trials and four editions of the PCOMS manual later, this ideal has become manifest.

I gave her the mug pictured below to both commemorate her social justice work (I often called her a warrior for her efforts) and the publication of the first PCOMS manual (also pictured below), Heroic Clients, Heroic Agencies: Partners for Change. 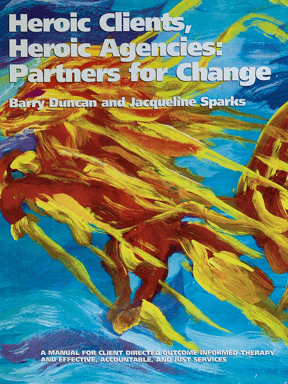 The second ideal was an unwavering commitment to challenge the status quo, to question presumed mental health authority and ask the hard question, “Who benefits from this?” But this was not just a rebellious question, it emerged from a deep dive into research and exposing the science, or rather the science fiction masquerading as science, regarding psychiatric diagnoses and psychotropic medication. Our 2000 article in the Psychotherapy Networker, “The Myth of the Magic Pill” called attention to the flawed science and the financial web of deceit of the pharmaceutical industry. This article was recognized by Project Censored as one of the “Top Ten Under-Reported Stories of 2000.” It also received the “The Networker 20th Anniversary All Time Top Ten Award” as one of the most influential features in magazine history. Since then, Dr. Sparks continued to question the “taken for granted,” exposing the bankrupt science and corruption that permeates psychiatric diagnosis and medication in multiple articles in top tier journals, uncovering  the  methodological tricks of drug company research and building the case for psychotherapy as a first line intervention for both every day and catastrophic problems that humans face. For this enormous body of work, Jacqueline received the Lifetime Achievement Award from the International Society of Ethical Psychiatry and Psychology.

Jackie was also my closest friend, my ally through thick and thin. I counted on her keen analyses and insightful perceptions of any situation, personal or professional, and I knew I could always expect her unyielding support. Knowing this made me stronger and knowing her made me a better person.

Jackie was diagnosed last summer, and she courageously faced and endured everything that might prolong her life. Simultaneously, she squeezed every ounce of enjoyment out of each day, playing her violin (she was a brilliant musician), decorating her new house, and traveling with her partner, Martin, and her sister and brother-in-law (Trish and John). Just a couple of weeks before she died, although not able to eat, she travelled to New York and profusely enjoyed a concert (Tedeschi Trucks Band) at the Beacon Theater and a Broadway musical (Six). She excitedly gave me a detailed description of the trip in our last conversation before she was hospitalized.

But treatment did not stop the aggressive spread of the cancer. Suddenly, months left became weeks left, and then days left—the end came unexpectedly rapidly. Our plan for her and Martin to escape the cold and stay with Barbara and I in January was not going to happen. With her death imminent, I flew to Rhode Island to give my last goodbye to my best friend. It was devastating, yet beautiful and inspirational. When Jackie awakened and saw me, she cried and we shared 25 years of love expressed in joyful tears. Unbelievably, in her weakened state, she asked the nurse to help sit her up, with her legs over the side of the bed so she could face me. Her body barely there and her voice but a whisper, we talked until she couldn’t anymore. We discussed our work, our history, our relationship—we laughed and cried, and said everything that needed to be said.

After an emotionally soothing dinner with her fantastic partner, Martin, also a lifelong social justice advocate, I laid awake that night in my hotel feeling the brunt of my grief. Because I couldn’t accept that I wouldn’t see her or talk to her again, I planned to stop at the hospital and see her one last time on the way to the airport. I summoned  a car on a familiar service and waited…and waited until I got the message that no cars were available. I had never experienced this before, but this was a small town, not like the cities I usually frequented. I was frantic. I called other local services but only got recordings. When I was about at my wits end, the front desk person, Stacy, said she would get back to me after I told her I would gladly pay $20 (the cost of the service) for the ride if anyone there could do it. The manager okayed it, and Lucas, a young man of no more than 19 took me to South County Hospital where my friend lay in a Hospice bed.  Lucas, who I noticed was not wearing trendy clothes or expensive sneakers or anything even remotely new, asked me about my friend and told me of his grandma’s battle with cancer. We enjoyed a quiet, empathic, and melancholic ride, our shared experience making an unspoken connection in minutes, if not seconds. There was a wonderful, comforting kindness to this young man that provided some solace to my grief. When we arrived after our brief trip, I pulled out my wallet to give him the twenty, and he told me he couldn’t accept any money from me. I asked if he was sure as it was clear he could use it, but he declined and wished me the best.

I was disappointed because Jackie did not regain conscientious for my final visit. In fact, she didn’t regain conscientious after I left her the night before. I felt fortunate and gratified that I had said everything I wanted to say the day before. But I still said everything I wanted to say, again. Jackie died later that day. But as I experienced my grief about the loss of this stunningly compassionate, brilliant human being, I realized that Lucas somehow personified Jackie’s kindness and integrity. In this world of vitriol and hatred, there are those who care about the plight of others, and act to ease their burden in small but meaningful ways. Thank you, Lucas, for showing the spirit of Jackie, and continuing my faith in the human species.

And thank you, Jackie, for being in my life, enriching me personally and professionally, and being the friend who everyone should be fortunate to have. I love you. I miss you.