In this historical series of blog posts discussing the journey to client-directed therapeutic services, the previous topic was changing the rules. This post shares insights gained from The Heroic Client.

Although it took me a while to warm up to the idea of starting off a session with an outcome measure, I ultimately embraced it as a radical development—a methodology that routinely placed the client’s view of progress at the center of therapy.

I started with Michael Lambert’s Outcome Questionnaire 45.2 (OQ; Lambert et al., 1996) in the late 90’s in my private practice, in a clinic with graduate students, as well as my consultations with behavioral health agencies. It provided a way to realize what Duncan, Solovey, and Rusk (1992) called “client-directed” clinical services.

I liked the OQ because I particularly resonated with the idea that the client’s perspective of benefit could “direct” the therapeutic process. It seemed a way to systematically privilege the client’s voice, a radical innovation that could finally give the client his or her due.

But problems ensued. Despite its obvious strengths, many clinicians complained about the length of time needed to complete the measure.  They also said that it did not seem to fit, because of its symptom focus, many of the concerns that clients brought to therapy. 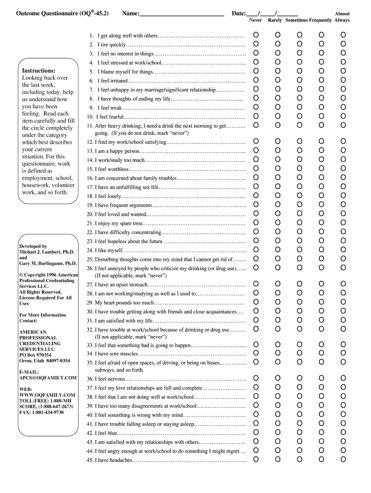 It became apparent that, in spite of the quality of the measure, the benefits of outcome monitoring would not occur if clients saw it as a burden and therapists didn’t use it.

This sobering realization not only came from my attempts at implementation at the graduate student clinic which resulted in an abysmal one year compliance rate of 25%, but also thanks to a study I conducted (with my then superstar student Jacqueline Sparks) that compared a feedback condition using the OQ and the Working Alliance Inventory (WAI; Tracey & Kokotovic, 1989) to a condition in which therapists were taught “checking-in” questions about outcome and the alliance. The checking-in questions were an attempt to see if a more client/clinician friendly process would achieve similar results as formal outcome management.

During the study, we published The Heroic Client (Duncan & Miller, 2000), a book I named to highlight the contribution that clients make to outcome, that introduced using the OQ and the WAI. The Outcome Rating Scale (ORS) and Session Rating Scale (SRS) were not yet developed. Here is what I wrote about my favorite proverb, “Until lions have their historians, tales of hunting will always glorify the hunter.” 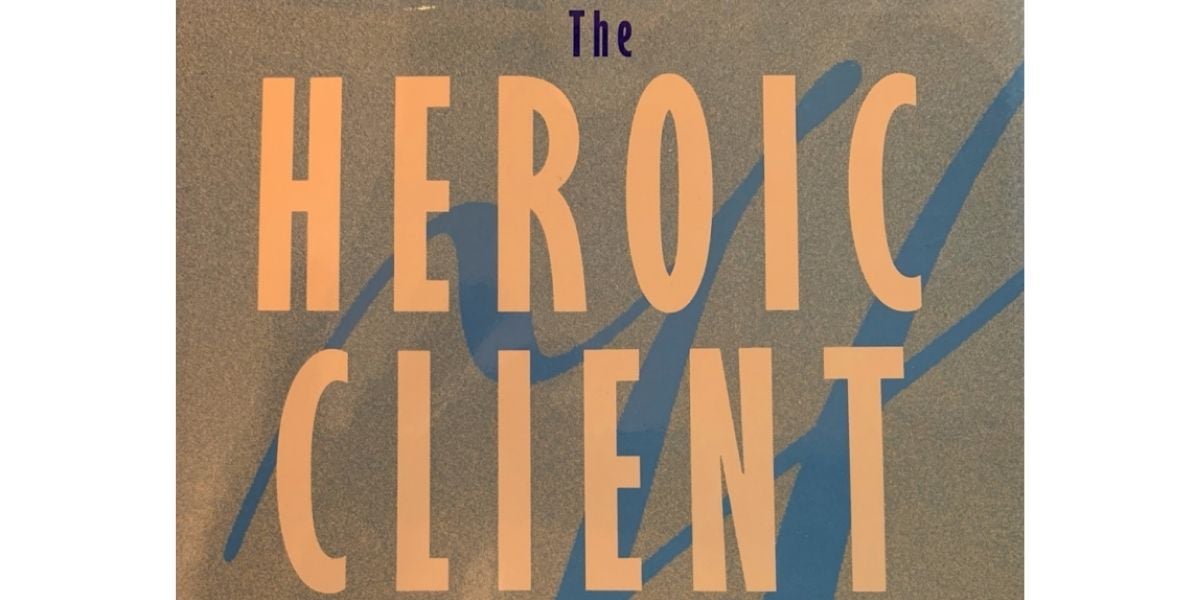 Clients have too often been relegated to playing faceless parts in the hunt for change. Therapist tales have documented countless clients whose pathology fell prey to the arsenal of the model of the month. Therapy, however, is now at the verge of a different description. Building on an explosion of mental health myths and the recognition of clients as the real lions of change, this book now seeks to document the lion’s story of the hunt. In this tale, clients demonstrate their power, courage, and cunning in overcoming all the obstacles placed before them. Through client directed, outcome informed therapy, we become historians for our clients’ views of progress and satisfaction with the hunt for change. This history, in turn, documents the effectiveness of therapy.

Back to the Study of OQ + WAI Usage

This failed investigation confirmed that longer measures of outcome were not feasible for everyday practice and that teaching therapists checking-in questions did not result in the hoped-for routine discussions of outcome and the alliance. This realization led to the development of the Outcome Rating Scale and Session Rating Scale, structured yet feasible ways to systematically “check in” with clients about progress and the alliance.

In this historical series of blog posts discussing the journey to client-directed therapeutic services, the development of the measures is the next topic - so stay tuned! But why wait? Start with the fruition of my now 23-year journey with a free trial of Better Outcomes Now and check in with your clients to improve both your effectiveness and efficiency: